T-Mobile has fully shuttered the Sprint brand, making Sprint, Spint-Nextel, Sprint PCS, and the Sprint Network a thing of history.
Even sprint.com now pretty much redirects all traffic to T-Mobile, with the only exception of coverage.sprint.com.
Even deep links into Sprint's website began redirecting to T-Mobile.  (Deep links are direct links to pages, like the Phones page.)

So we had no choice but to remove the Sprint name from our site, with the exception for MVNO's that still claim to use the now officially defunct Sprint network.
Technically, the Sprint network will continue to be active for up to 3 years, per the merger agreement.
But now its the T-Mobile CDMA network, which if T-Mobile is following the same playbook as the MetroPCS merger, will be turned off and converted ASAP.

Sprint's history is long, and for a short time, they were a major player in the market.
T-Mobile's idea of being the "Un-Carrier" was inspired by how Sprint continued to attempt to shake up the telecommunications and Wireless Markets.

I personally will always see Sprint as the original Un-Carrier for that reason.

You can read up on Sprint's history here:
https://en.wikipedia.org/wiki/Sprint_Corporation

While you are at it, check out Sprint "memory lane" commercials on YouTube here:
https://www.youtube.com/results?search_query=sprint+commercial

Remember, as of the end of Sprint, they only covered 300 Million people, or about 91% of the Population at the time.

Now we are working to figure out what this will mean for Sprint MVNO's, and it may take some time for these MVNO's to fully update their services due to the merger  and network integration with T-Mobile.  We do know one thing.  The MVNO's will have to work with T-Mobile now, which will mean upgrading their services to offer T-Mobile Phones and Network coverage.  This will mean eventually (more than likely within the next year or two) all customers with Sprint devices will have to upgrade their phones.  If you are a Sprint/Boost customer, these upgrades will be to T-Mobile devices.

As for customers on independent Sprint MVNOS:

The MVNOs may already offer service with other providers, allowing them the freedom to merely drop all Sprint support.
If this is the case, you're next phone will have to be one that works on the new parent networks.

The MVNOs already have an agreement with T-Mobile alongside Sprint, allowing Sprint devices to no longer be sold or activated.
This will allow the MVNO to "seamlessly" upgrade you to a T-Mobile device, SIM, and network.

There are still some MVNO's that only have agreements with Sprint, and this is where it gets tricky.
These MVNO's will have to either come to an agreement with T-Mobile, which will allow device upgrades to T-Mobile devices and network.
Or they will have to create an agreement with another carrier, which may take some time.

Customers of Sprint only MVNOs right now will be in for a rough ride.
The new agreements may incur changes to the rate plans alongside a device upgrade, and these upgrades may have only a year to take place.

T-Mobile will be integrating Sprint's network into its own, and has already been aggressively doing so for LTE and 5G.
But this will mean that Sprint's CDMA network will be shut down anywhere between 1-3 years from now and will be converted to T-Mobile's technology.

This means that all Sprint devices will need to be upgraded to new devices and SIM cards for the new networks fairly quickly.
T-Mobile has already announced plans to shutter 3G support as early as next year and will no longer allow devices that do not support VoLTE to be activated as of August 6th, 2020.  This will eventually include nearly all of Sprint's device lineup, since Sprint was never able to fully deploy VoLTE prior to the merger.

One thing I personally would love to see, Paul as the spokesperson for the new T-Mobile, would be a lot of fun to see the former "Can you hear me now" guy essentially doing the same thing - but for the Un-Carrier instead.  (Considering that T-Mobile and Verizon are currently tied for population coverage and AT&T has taken a slight lead.)

We will be keeping track of all the Sprint MVNOs in the months to come to see how they update their services since the Sprint/T-Mobile merger is now fully complete and Sprint is no longer an active brand, much less a parent-network business.

I still want to petition the FCC to make MVNO agreements so that the MVNO must state on their site who's networks they use.

While the Sprint name is not fully dead yet, mainly due to MVNO's who still use Sprint's Network and/or claim Sprint as their Network provider.... Alongside BestBuy's arrangement to sell Sprint phones and services.  (So now you can get T-Mobile service by buying and activating on Sprint at BestBuy.  Which is something T-Mobile has never done in the past - partner with a 3rd party national retailer.)  The Sprint name is being retired, and the network will eventually follow suit.

But even T-Mobile is giving a nod to the legacy that was Sprint:

And if you think "Sprint - Now Part of T-Mobile sounds familiar, maybe you remember these commercials:
https://www.youtube.com/results?search_query=cingular+is+now+the+new+at%26t

Goodbye Sprint, I'm sure you will be missed.

Twigby gave us this:

Hello! Twigby, Sprint and T-Mobile customers will continue to get great coverage. Over time, the Sprint and T-Mobile networks will combine to create one supercharged network with average speeds 8X faster than current LTE in just a few years and 14X more total capacity in the next six years than either company would have standing alone. Plus, many Sprint devices will be compatible with the new T-Mobile network. A timeline is not set yet. However, we will be sure to keep our customers updated as we progress.

Tello sent us this:

Thank you for choosing Tello.

Your Tello service will not be adversely affected by any upcoming merger between Sprint & T-Mobile and the migration would take some time to complete.

In the longer term, we only expect positive changes to result for our customers as regards service and pricing.

We'll keep you updated in case there are any updates that might affect you or your service.

For any other inquiries, check out our Help Center at:
https://www.tello.com/help_center. 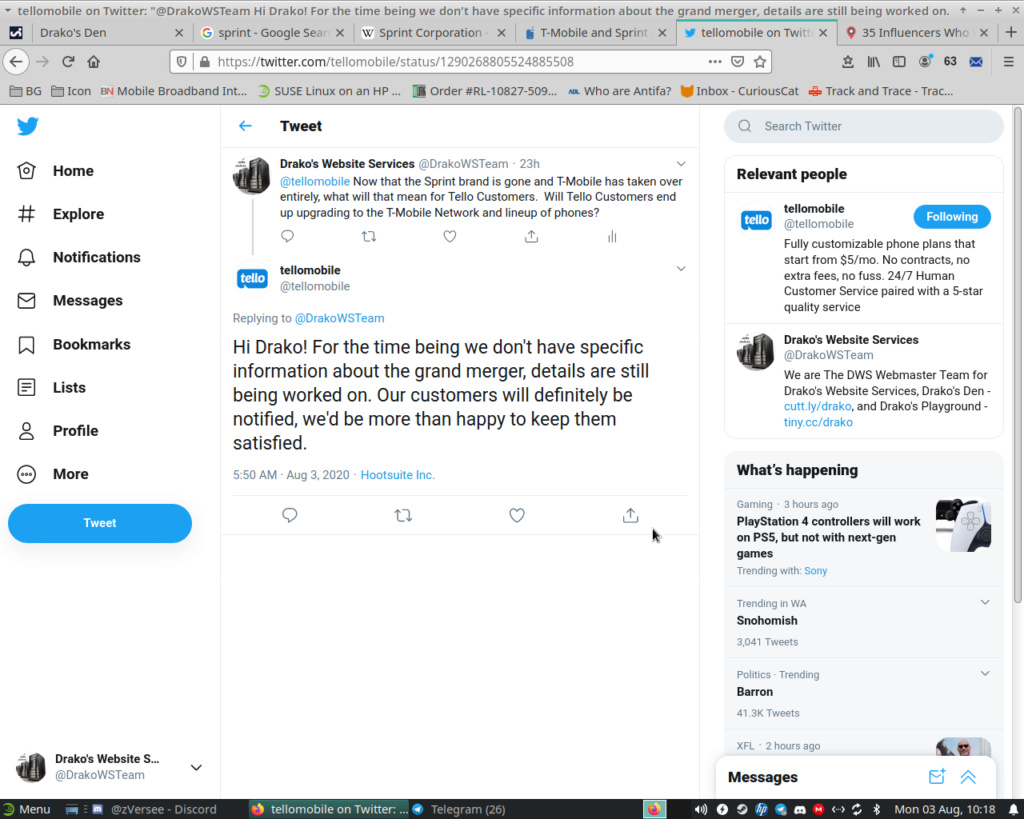 At this time we have not be notified from Sprint of any changes on their services besides the name; they expect to continue offering service with their same phones and coverage while integrate the two networks which will only add additional coverage areas.

We moved to AT&T and Verizon 4 months ago. Will have no effect other than better service.

We are launching a new service in the coming month. Unlimited TALK TEXT and 1GB of data FREE.
Stay Tuned… 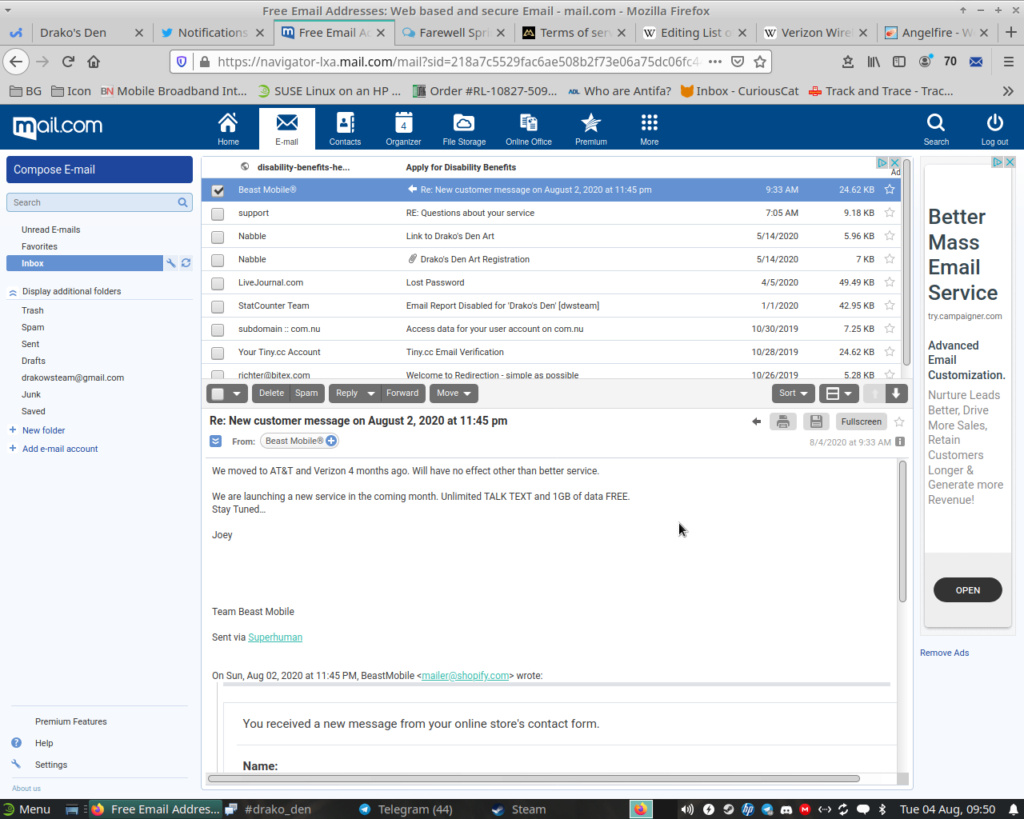 We noticed Tello started to advertise VoLTE on most of the phone they sell, including devices made back in 2014.

So far, the only devices sold by Tello not advertised to support VoLTE are:
Alcatel Go Flip
Motorola Moto E4
Samsung Galaxy S6

Since we know the e4 does has the ability to support VoLTE, we had to ask if some of these devices would eventually gain the provisioning for it. Apparently, they are deep in talks with T-Mobile regarding the merger and the future of Tello customers, since this is the response:
"Hi Drako!, we are sorry but we will have to ask you to be patient on this one, as we do not have the answer yet. Once the merge is done we will notify everyone and you will see several improvements on Tello." 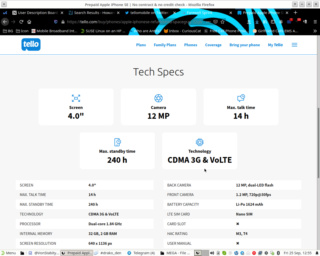 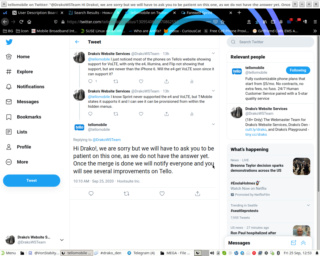